COVID19: Actions and Reinforcement Coming Late By All Government After Thousands of Lives Have Been Lost..

In my life journey i have learned to understand that knowing your background and translating your experience is a huge  part that transform your whole being.

Multicolored, so is qualified the childhood of Lupita Nyong’o, born in Mexico of Kenyan parents. Before her first birthday, Lupita sees herself returning to Kenya with her family. An influential politician, his father held many important government posts, including that of Minister of Health, and later that of Senator. The world of showbiz is still far away for Lupita, who suspects nothing. 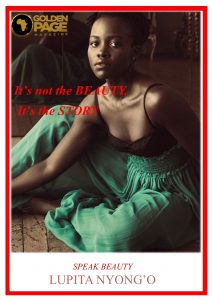 His passion for cinema was born after watching Whoopi Goldberg’s performance in La Couleur pourpre . It was in the United States that she went to study cinema and try her luck, at Hampshire College and then at Yale University. In 2005, when the feature film The Constant Gardener by Ralph Fiennes was filmed two blocks from her home, she managed to join the film crew and be a production assistant on the film.

Completely absorbed by this universe, she continues behind the camera by making a documentary In my Genes , which evokes the life of albinos. The film’s success was resounding and was presented at various international festivals. This master stroke enabled him to land his first role in the Shuga series .

It was an important decision she made later: trying to graduate from Yale, she decided to try her luck during auditions for the film 12 years a slave .  Banco:  Steve McQueen notices him among more than a thousand candidates to play the character of Patsey, the slave martyred by his master, played by Michael Fassbender . The film receives an avalanche of praise and the performance of Lupita is recognized as exceptional. This role determines his future in cinema and in his life and allows him to win several awards including the Oscar for best supporting role. 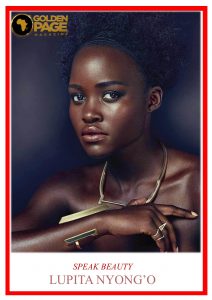 The same year, she played alongside Liam Neeson and Julianne Moore in the airplane thriller, Non-Stop. Since then, the actress has been chosen to interpret in Star Wars: The Force Awakens , the character of Maz Kanata, the owner of a castle-refuge for all the mercenaries and bandits of the galaxy. She is in the cast of the other two installments in this new trilogy: Star Wars, episode VIII: The last Jedi and Star Wars, episode IX: The rise of Skywalker . Lupita Nyong’o is also in the cast of the dramatic comedy, Queen Of Katwe , by Mira Nair, where she gives the reply to David Oyelowo.